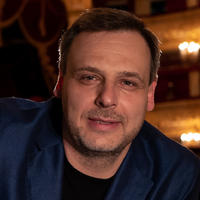 Pavel Klinichev graduated from the Moscow State Conservatoire in 2000 (choral, opera and symphony conducting). A year later, he became the Bolshoi staff conductor. His repertoire includes many of the masterpieces of Western and Russian opera and ballet.

Under his leadership, the premieres of seventeen ballet performances took place at the Bolshoi Theatre, including the recent ones: The Rite of Spring by I. Stravinsky (2013), Frank Bridge Variations to music by B. Britten, Short Time Together to music by M. Richter and L. van Beethoven, Symphony of Psalms to music by I. Stravinsky, Ondine by H.W. Henze, The Golden Age by D. Shostakovich (all in 2016), Romeo and Juliet by S. Prokofiev (2017), Petrushka by I. Stravinsky (2018 г.), Giselle by A. Adam (2019), Four Characters in Search of a Plot to music by M. Glinka, N. Rimsky-Korsakov, A. Pärt (2020), as well as the premiere of the operetta Moscow, Cheryomushki by D. Shostakovich (2021).

His repertoire at the Bolshoi includes also forty productions, the operas Prince Igor by A. Borodin, The Snow Maiden, The Tsar’s Bride and The Golden Cockerel by N. Rimsky-Korsakov, Iolanta and Eugene Onegin by P. Tchaikovsky, La Traviata by G. Verdi, La Boheme and Tosca by G. Puccini, The Fiery Angel by S. Prokofiev, among others, and almost all the ballets which were held on the stage of the Bolshoi Theatre over the last twenty years.

Maestro Klinichev appeared with the Bolshoi Opera, Ballet and Orchestra at the most prestigious venues, including Teatro alla Scala, The Metropolitan Opera, The Royal Opera House Covent Garden, The John F. Kennedy Center for Performing Arts, Opera Garnier, Bunka Kaikan (Tokyo), The National Centre for the Performing Arts (Beijing) and many others.

The discography of Pavel Klinichev is represented by the major labels: Universal, Decсa, Bel Air Classiques.