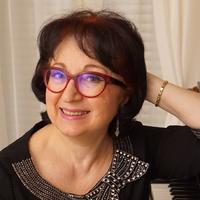 Svetlana Eganian was educated at the Tchaikovsky Conservatory in Moscow  by prestigious teachers such as Bella Davidovich and Zinaida Ignatieva, a disciple of the legendary Samuel Feinberg. She successfully obtained the four first prizes with distinction (soloist, chamber musician, teacher and accompanist- partner of opera singers) appraised by prominent  jury members of the Russian school as Tatiana Nicolaeva, Dmitrii Bashkirov, Evgenii Malinin, Lev Naumov, Serguei Dorenski.

She moved to France and since then teaches at the National Conservatory of Music and Dance of Lyon.In the early 90s she founded an International Summer Piano Academy to unite pianists of all levels and nations.

Svetlana Eganian was for several years Artistic Director of the Music Academy «Alizés» in Rabat, Morocco and conducts an educational and artistic activities also in Guadeloupe, Marie Galante and Martinique.

She is invited as a jury member or president of jury in international piano competitions in France, Belgium, Germany, Portugal, Lithuania, Russia, Ukraine, Italy, Spain etc.

President and Artistic Director of the G.C.I.P Competition, created in 1986, founder and Artistic Director of International Piano Competition in Lyon, created in 2009, President and Artistic Director together with Philippe Raskin of International Music Festival and competition in Paris, created in 2018, she continued her concert career and performed with her faithful partners such as Mark Drobinsky (cello), Georges Wanis (tenor), François Durand (viola),Yolande Gallay-Kouznetsov (for the repertoire of pianos duet) in France and abroad. She performed under the baton of Maestros such as the late Jean-Luc Balthazar (Belgium), Edward Ambartsumyan (Russia) and Christian Fitzner (Germany).

Her various recordings have been praised by the press: four-stars in "The World of Music" for the CD Grieg, Chopin, Liszt.

"... Impeccable virtuosity, her impressive technique, coupled with clarity of vision and high sensitivity, allow her to go deep in the soul of the works ..."

''Epic when it’s necessary, always lyrical, she knows how to maintain the mystery (...)''

''The clarity of the plans, the freshness and vitality of the interpretation and the subtlety of the touch are worth listening (...)''
Michel Le Naour – «The World of Music»

and after a recital devoted to A.Scriabine Philippe Andriot  wrote in the All-Lyon:
"... The virtuoso showed an unusual technique, made of fluidity and transparency. Her major quality, exceptional purity of style, allows the summits too little known like the eighth sonata to reach a power of seduction able to touch the less initiated public ..."